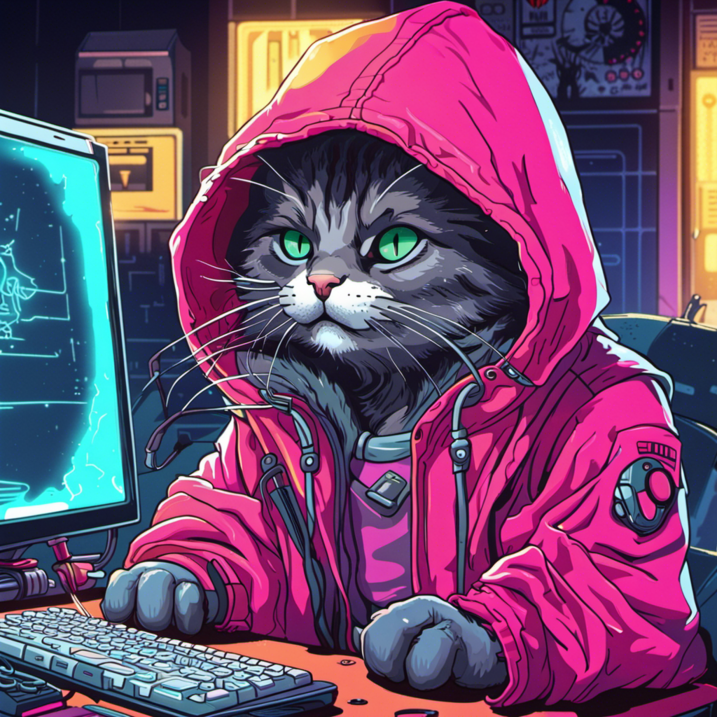 The fifth edition of the FireEye's Flare-on reverse challenge take place this year between august 24th and the 5th octobe with a total of 12 challenges centered on Windows binaries.

Welcome to the Fifth Annual Flare-On Challenge! The Minesweeper World Championship is coming soon and we found the registration app. You weren't officially invited but if you can figure out what the code is you can probably get in anyway. Good luck!

We download the 7z and after extraction we got the jar. We start jd-gui and load the jar. The InviteValidator class is the following:

We directly got the challenge flag GoldenTicket2018@flare-on.com.

You hacked your way into the Minesweeper Championship, good job. Now its time to compete. Here is the Ultimate Minesweeper binary. Beat it, win the championship, and we'll move you on to greater challenges.

When executed the program is similar to every Minesweeper execpt there is a LOT of mines! Only 3 squares of the 900 are not mines. The goal is to reveal this 3 squares with exploding on a mine. 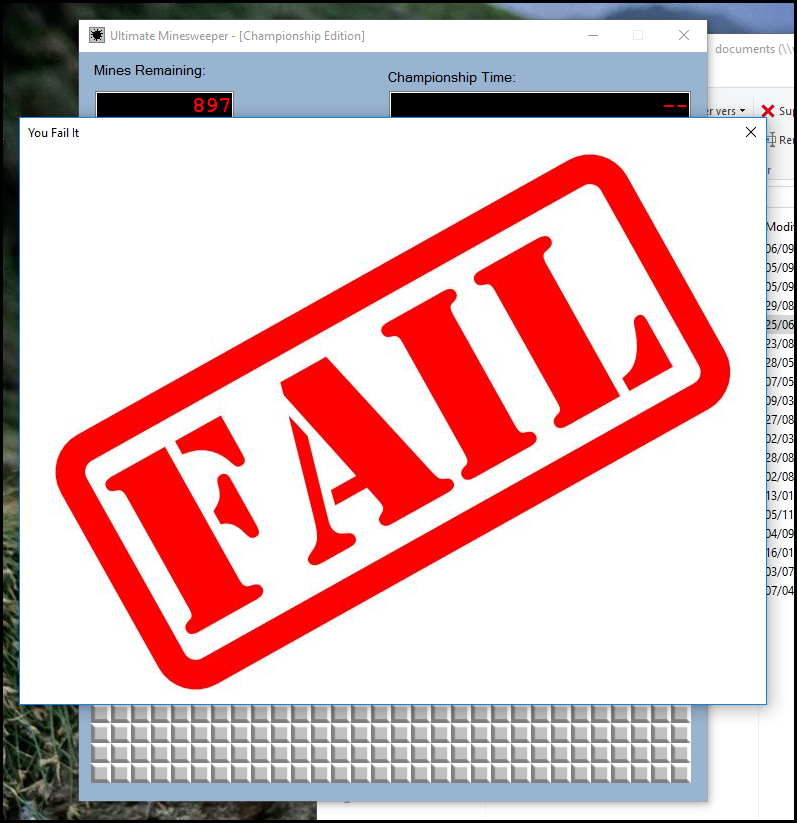 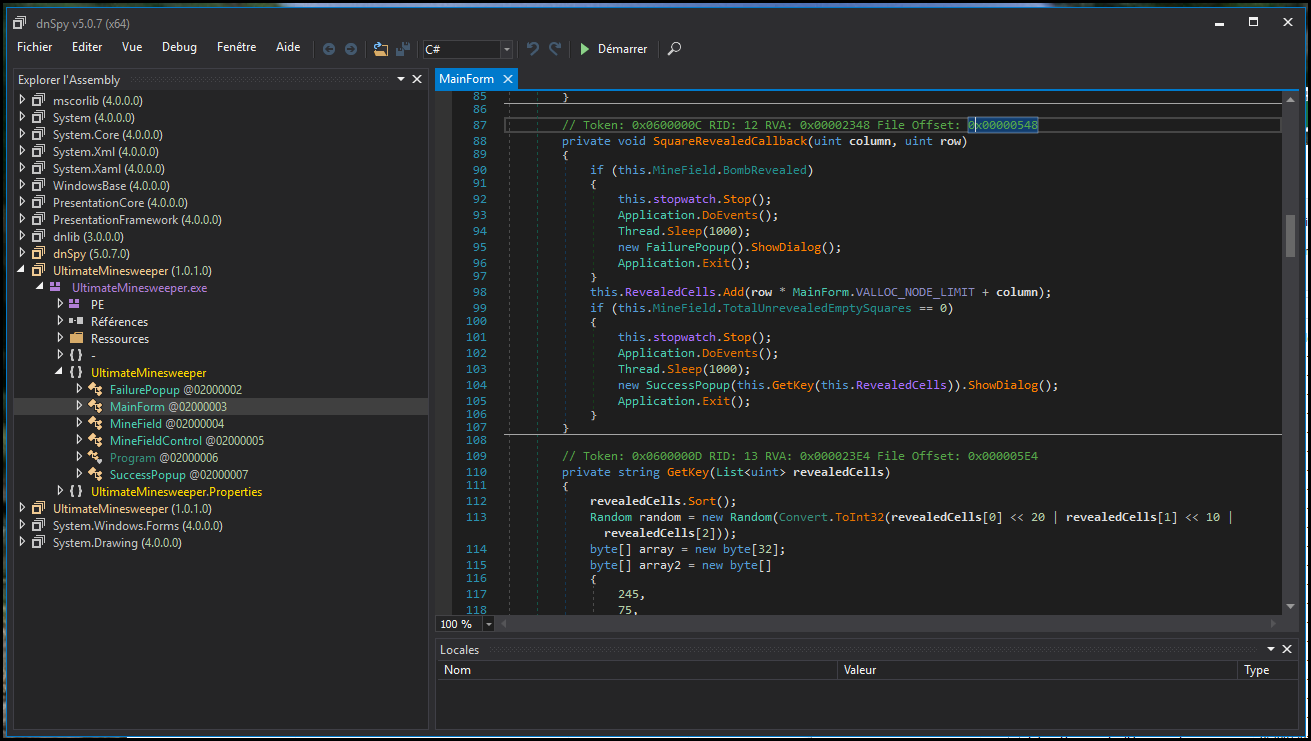 We can even recompile the code. Nevertheless , the line 156 will fire a compilation error. In order to fix it, we need to convert the value to byte:

We can for instance disable the failure when revealing a mine by changing the code of the BombRevealed function and make it always return false:

Then we can clic on every square and get the Success message. 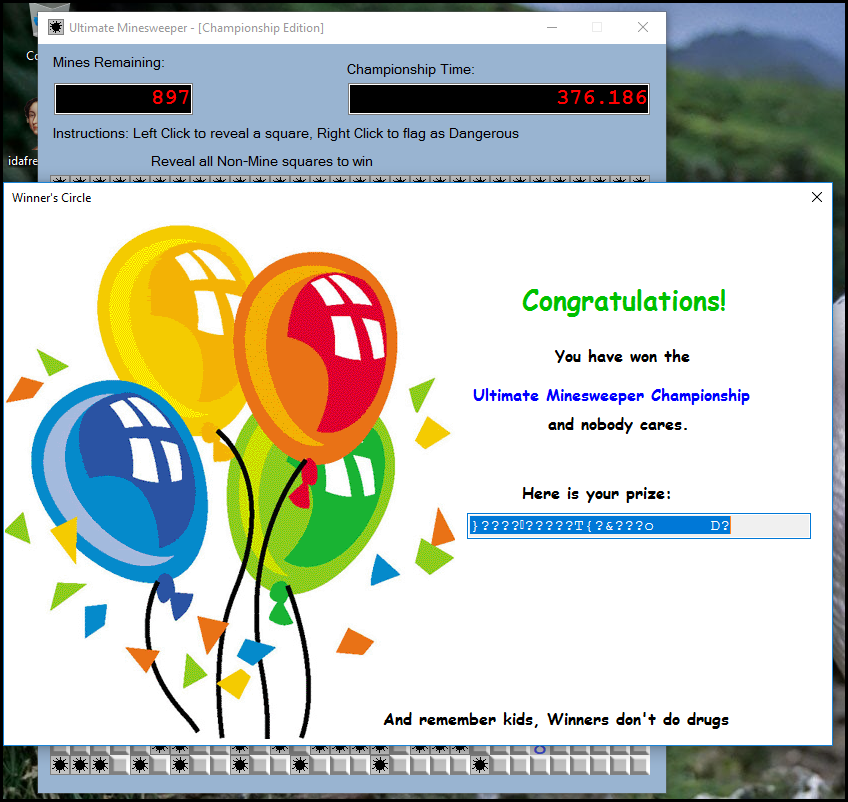 The flag seems to be encoded. When looking at the function GetKey we see that the Random is build using a seed depending of the revealed cells.

We then discover that the mines (and more importently the 3 empty squares) are always at the same place. So we can just found the position of every empty squares with our modified binary. 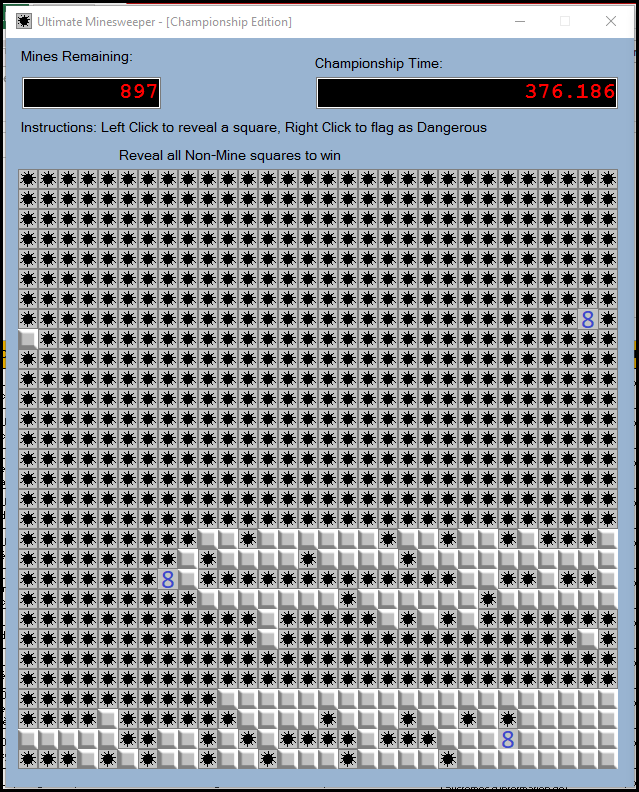 And then just reveal this three squares in order to get the Success message with the flag. 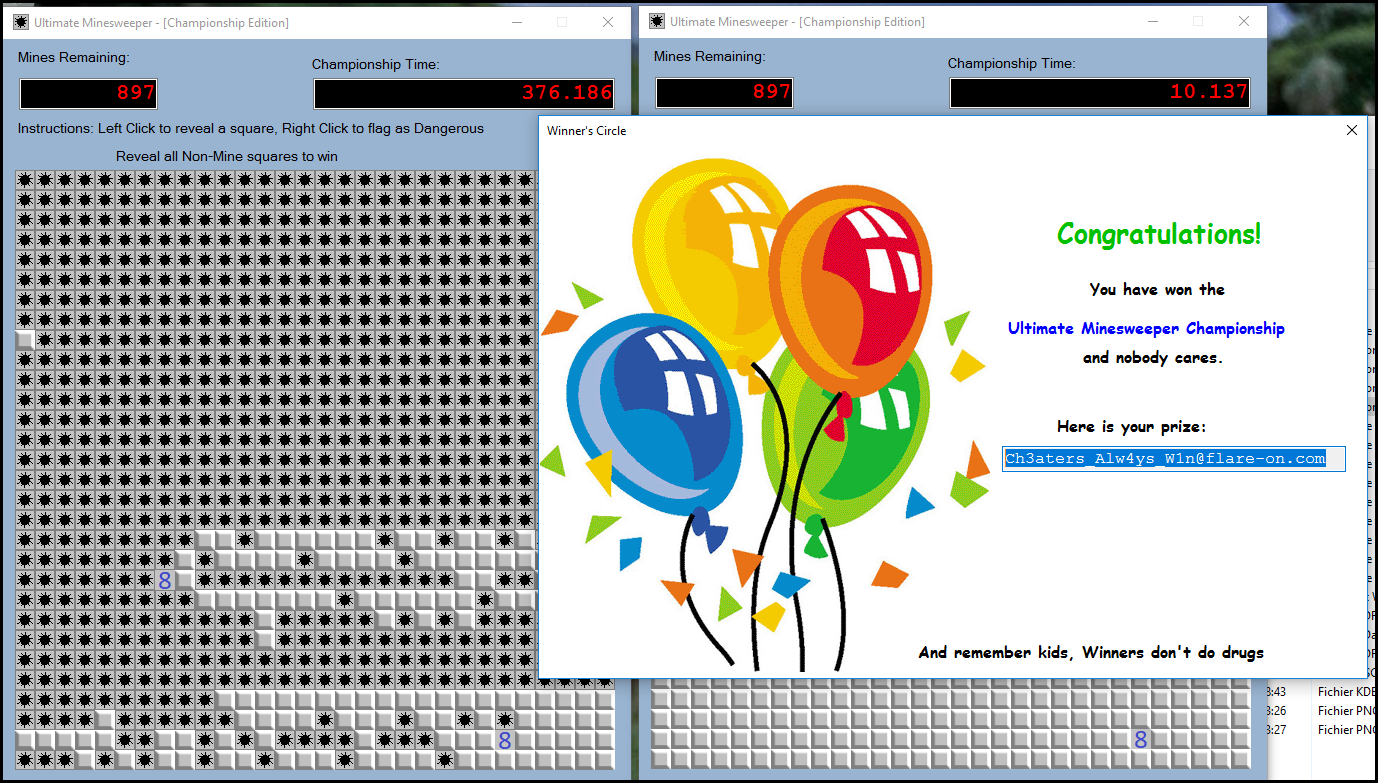 When you are finished with your media interviews and talk show appearances after that crushing victory at the Minesweeper Championship, I have another task for you. Nothing too serious, as you'll see, this one is child's play.

Once extraxted we get 48 executables. Each binary is a 32bits executable.

When launching any of the executable we get an error about the VCRUNTIME140 DLL missing. 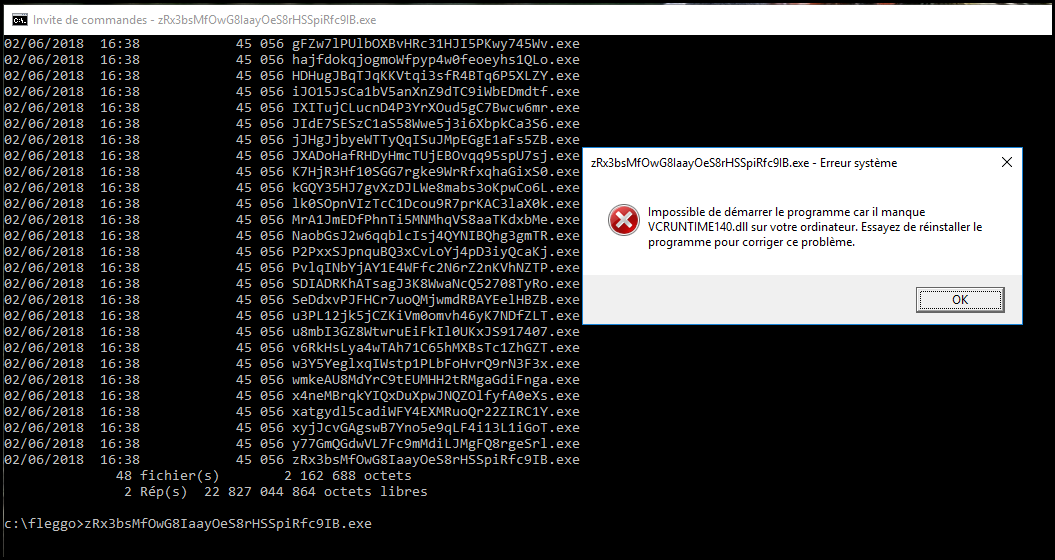 To fix this you just need to install Visual Studio Community Edition.

After a few try using IDA and OllyDBG, I found a hint on twitter: 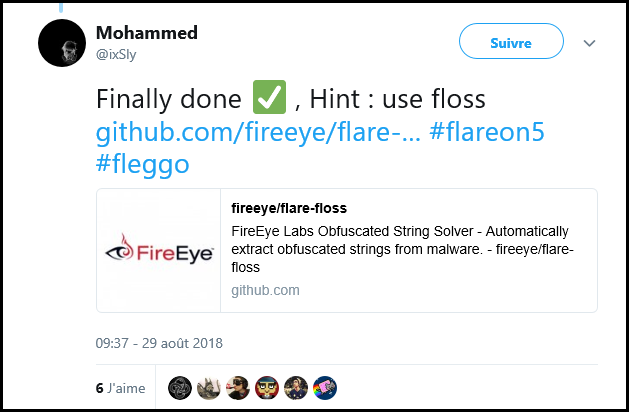 The binary password is given just after the BRICK string.

An image is created associated to a character.

We can automatized this for the 48 binary:

A simple redirection allow to keep the information in a file. In the corner of each image is the position of the associated charactere. (for instance the image 85934406.png is associated to the letter "m" and the number in the right corner is 35 so the "m" is in the 35th position). 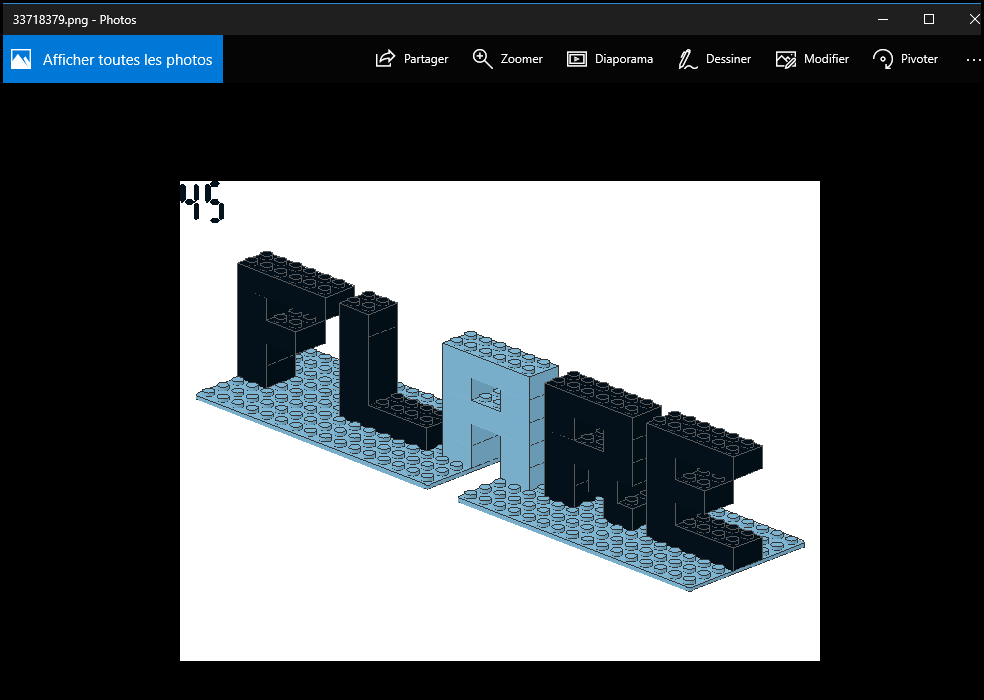 We might use tesseract in order to automaticaly detect the number in the corner. But I manualy identify them and got the order of the flag:

It is time to get serious. Reverse Engineering isn't about toys and games. Sometimes its about malicious software. I recommend you run this next challenge in a VM or someone else's computer you have gained access to, especially if they are a Firefox user.

Once unzip we get a simple executable.

As said in the descritpion this file is a malware and a lot of AV detect it as someone uploaded it on virus total. 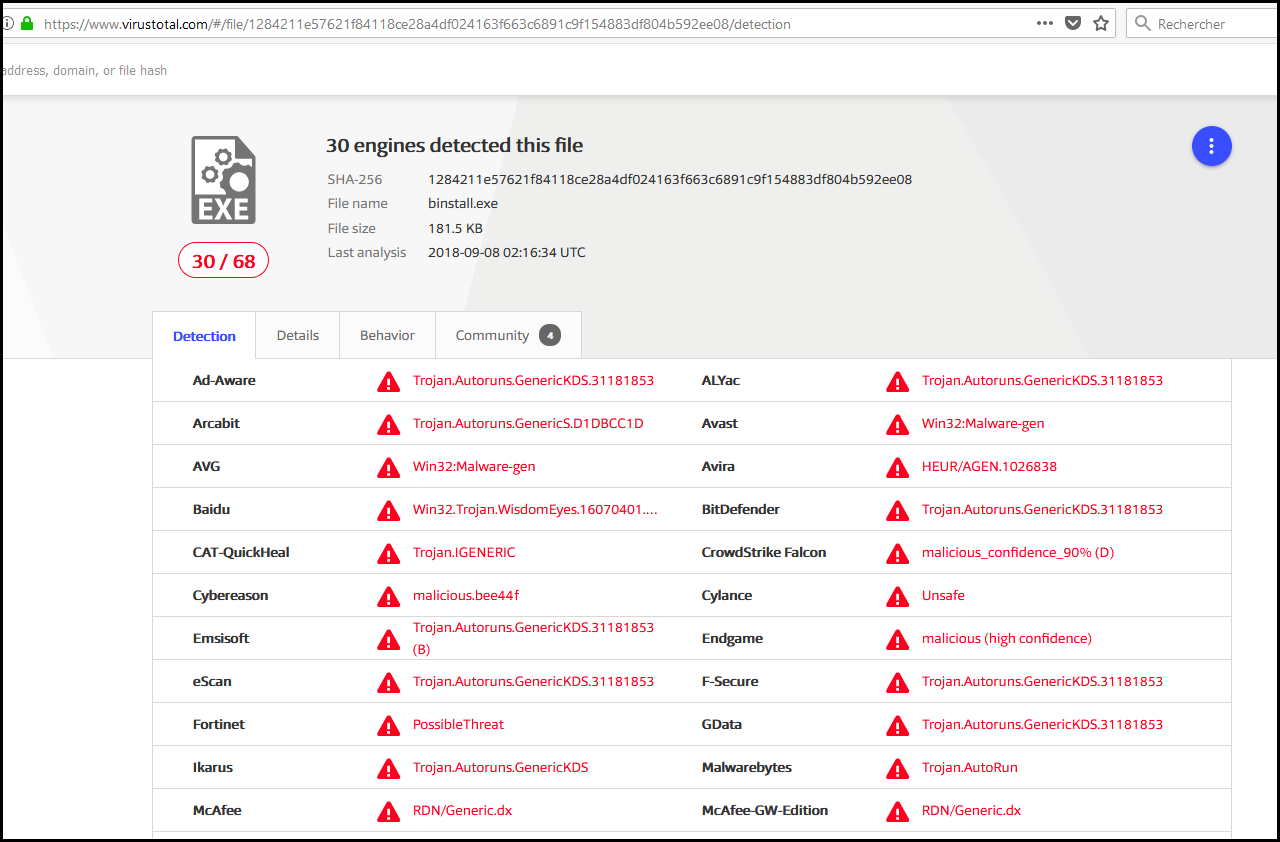 I didn't get a lot of time to work on this challenge and didn't solve it.

The contest is now over and fireEye realse the solution for all challenges.